Kylemore, (Coill Mor) – the Big Wood. This splendid valley is renowned worldwide for its breathtaking beauty which is dominated by Kylemore Abbey. The Castle was built in 1864-1871 by Englishman Mitchell Henry as a token of love for his wife, Margaret. It is now an Abbey, run by Benedictine nuns and, although primarily a school, it offers many attractions to visitors. Enjoy a stroll down the lakeside and tree-lined avenue to the Abbey and on to the Neo-Gothic Chapel which has been magnificently restored in recent years. For the garden lovers amongst you, a visit to the Victorian Walled Garden on the grounds of the Abbey is a must. To complete your visit the craft shop or have a coffee or homemade cake in the restaurant.

In late Spring and early Summer anyone walking, cycling or driving through Kylemore will be overwhelmed by the abundance of Rhododendron.  These massive, exotic, purple flowers are surreal at times and their reflections in the lakes are a wonderful sight. Kylemore is also known for its lake fishing and walks. Enthusiasts for both have flocked to this area for centuries. The Bed & Breakfasts, Lodges and Hotels in this area are always happy to share their local lore and point their guests in the right direction for hill-walking or fishing. Kylemore is well serviced with a petrol station and shop and a garage with a 24-hour breakdown service.

Kylemore and its lakes are steeped in history. The Castle-like Abbey was built in 1860’s by Manchester tycoon Mitchell Henry as a present for his beloved wife. They both fell in love with the area on their honeymoon. The vast sums spent by Henry in building his castle and development of the estate brought employment to the area. Henry’s wife died in 1874 and he built the Gothic Chapel in her memory. Henry had his wife embalmed and her body is buried in the mausoleum next to the Church.

The Neo-Gothic Church and the Victorian Walled Garden at Kylemore have been restored to its former glory in recent years by the Benedictine Nuns.  You will notice as you pass the lakes, the hills on the far side are indented with ridges. These would have been planted with potatoes before the famine (1840’s) when locals sought out an existence to feed their families on steep, rocky hillsides. Lake fishing and beautiful walks are synonymous with this area.

A short walk eastwards from Kylemore Abbey leads to the diminutive Gothic church, built by Mitchell Henry as a memorial to his wife, who died not long after the castle (now Kylemore Abbey) itself was constructed. Designed as a ‘cathedral in miniature’, this exquisite building has many of the hallmarks of its larger gothic counterparts: a fan-vaulted ceiling of Caen sandstone, projecting corner buttresses, angelic gargoyles and pointed arches. The marble columns that support the vaulted ceiling are made of four Irish marbles: reddish-pink from Munster, black from Leinster, white from Ulster and green Connemara marble from Connacht. The stained glass window in the south transept depicts the five graces: fortitude, faith, hope, charity and chastity.

It was originally intended that Henry’s wife would be buried in the crypt below the church, but her husband could not bear the thought of burying her below ground, so she was laid to rest in a mausoleum a short distance from the church.
The gothic church stands beside Kylemore Lake at the foot of Doughruagh mountain, nestled amongst trees and rhododendron, in the middle of an area of breathtaking mountain scenery. The name Kylemore itself is taken from the Irish ‘Coill Mór’ meaning ‘big wood’, referring to the ‘hanging wood’ that climbs the hillside. Although infested by rhododendron, the woodland still contains an interesting variety of plantlife including a number of notable mosses and bryophytes.

The lake itself is known by fishermen for its salmon and seatrout, but is also one of four Connemara lakes containing Arctic charr, which is listed as threatened in the Irish Red Data Book. 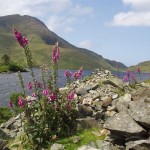 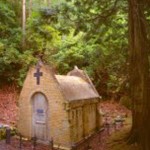 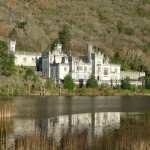 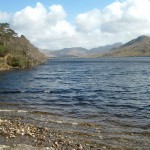 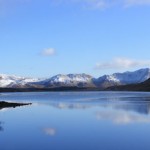 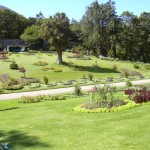 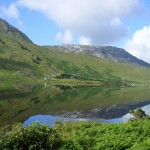 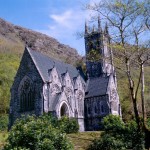