The Connemara pony is Ireland’s only native breed, with a history that some believe dates back to the ancient Celts. The Celts, who were skilled horsemen, developed the Pony from Scandinavian ponies that the Vikings first brought to Ireland

Though much of the Connemara Pony’s early history is based on legend and fable, it is also said that Spanish horses contributed to the breed after the sinking of the Spanish Armada when it ran aground in 1588 in the 16th Century, the shipwrecked Andalusian horses on board were set loose and swam to shore and interbred with the wild native ponies thus refining the local native wild ponies.

For additional strength and stamina, Arabian blood was added in the 1700s. They were also crossed with Hackneys and Thoroughbreds. Too much crossbreeding began to dilute the pony bloodlines, so the Connemara Pony Breeders’ Society, founded in 1923, for the purpose of taking steps that would lead to the preservation and improvement of the Connemara Pony. The stud book was established in 1926.

Early Irish farmers often had large families to feed and could afford only one good pony, which often came from a wild herd and had to be caught and gentled. Most families owned a mare so they could sell her offspring for much-needed income, and even while pregnant she would be required to pull a plow or a cart filled with rock, turf, or people. Any animal that couldn’t perform these tasks on a daily basis was replaced. This difficult lifestyle helped the Connemara develop its trademark stamina and adaptability.

Despite this long and colorful history, the Connemara didn’t become an “official breed” until the Connemara Pony Stud Book was first published in 1926. The book was compiled by 30 “mostly local” Connemara gentlemen, who were concerned about the dwindling population of local mares. The group formed the Connemara Pony Breeders Society with the sole purpose of promoting the best of these mares. In an effort to improve and invigorate the breed, the Society selected the best stallions from the area and persuaded local farmers to only use the services of those stallions.

Today’s Connemara is gaining popularity throughout the world as both an adult and children’s pony. Its Gentle, trusting, honest and willing temperament and adaptability makes it well suited to a variety of disciplines, from Show-Jumping, Eventing, Endurance and Showing to Dressage.

The Connemara is famous for being hardy and sure-footed, and no surprise the breed evolved on the rocky coast of western Ireland, where it had to develop an ability to move quickly across rough terrain. The sometimes harsh Irish weather and unforgiving landscape helped develop a breed that is resilient and adaptable, and today’s Connemara is valued for all of these qualities. Average Height: 13 to 15 hands, but they can be taller than this.

The Recognised colors are grey, bay, brown (genetically, a darker variant of bay), and dun, with some roans, an occasional black, chestnut, or palomino. Connemara ponies can also be cremello in colour known as a Blue Eyed Cream.

Connemara ponies are strong and sturdy with a short back and sloped, muscular croup. The hindquarters are powerful. The shoulder is sloped and long. Their legs have short, strong cannons and hard feet and a good stride length. The breed has a fine head with small ears and usually a slightly dished profile set on a well-arched neck. The Connemara is considered hardy and agile, with good jumping ability. The Connemara has a lively but eager and trainable temperament, tends to be long-lived and is described as intelligent. They are hardy and are excellent mounts for children

Today, Connemara ponies are bred worldwide and there are Connemara Society’s found in the United Kingdom, as well as on the European Continent, the United States, Canada, Australia, New Zealand and South Africa. 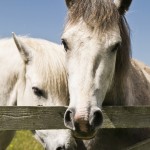