On May 21–22 2010, International Biodiversity Day, six wildlife sites across Ireland took part in ‘Biodiversity Blitz’ – a race to see which site could record the most species in a 24 hour period.

Connemara is justifiably famous for its beaches – vast stretches of sand, where often the only footprints are those of various seabirds or the occasional otter. The Renvyle area is particularly blessed with wild, wave-washed strands overlooking the Atlantic ocean and offshore islands – a landscape that has inspired painters, poets, writers and film directors, including such luminaries as Oliver St John Gogarty, Oscar Wilde, W B Yeats and Augustus John.

Among the best known beaches are the spectacular White Strand, a seemingly endless expanse of white sand with its stunning backdrop of mountains, stretching into neighbouring County Mayo; Glassilaun, with a pristine beauty that has featured in a number of films, including Tristan and Isolde, directed by Kevin Reynolds; Lettergesh, one of the locations of the renowned film The Quiet Man, starring John Wayne, and Tully Beach (Tra na mBan). For those who are prepared to do further exploring, there are also smaller coves dotted along the coastline.

Sand-dunes topped by stabilising marram grass are a feature of a number of the beaches; others are fringed with rocks, where marine life, such as sea anemones, sea urchins, shrimps and crabs can be observed close up in tidal rock pools. There are also beaches composed almost entirely of pebbles, and while these may not be as easy on the feet, they are home to a number of interesting plant and bird species.

In addition to spectacular views of mountains, offshore islands and the Mayo coast, the beaches offer many hours of pleasure to those who are interested in natural history. Whilst Connemara’s exposed shores do not play host to the vast numbers of avian winter visitors found on the east and south coasts of Ireland, there are some interesting species that may be observed.

SOME BIRD SPECIES OF THE CONNEMARA COASTLINE

Turnstones and curlews are attracted to those parts of the shoreline with quantities of seaweed covered boulders. Sanderlings usually frequent sandy beaches, while small groups of oystercatchers, with their distinctive black and white plumage, bright orange beaks and pink legs, are easily seen near the water’s edge, but species such as redshank, turnstones and bar-tailed godwit require a keen eye in order to spot them amongst the seaweed where they are likely to be found.

Offshore birds, such as the common shag and cormorant may be seen, usually flying over open water, while grey herons may wait patiently for fish at certain inlets as the tide turns. Connemara gull species include the lesser and great black-backed, herring, black-headed, common, glaucous and Iceland gulls. Several species of terns nest on a number of inshore islands, including Illaunmore, just off Glassilaun beach.

SOME COASTAL PLANTS OF CONNEMARA

Sea holly Eryngium maritimum is a beautiful plant that graces many sandy and shingle beaches in Connemara. The prickly grey blue leaves and globular, thistle-like blue flowers (June_August) form a distinctive bushy plant. Sea holly is anchored firmly by roots that may be as much as 2 metres long, allowing the plant to survive long periods of dryness. In Elizabethan times, the roots were candied and enjoyed as a sweet, whilst the young shoots were used in salads. It cannot be emphasized enough that this plant is no longer as common as it once was, and on no account should plants be removed from where they are growing.

Thrift, or seapink Armeria maritima, is found on most seashores, its unmistakable cushions of flowers producing vibrant pink carpets on sand-dunes, cliff-tops and the edges of marshland. Flowers may be seen during much of the year, but particularly from May to September.

Common scurvygrass Cochlearia officinalis is among the first coastal plants to flower once the coldest winter weather is past, its tiny, white, four-petalled flowers brightening up an otherwise undistinguished little plant. Its common name derives from its use in the past as a source of vitamin C by seafarers for the prevention of scurvy.

Biting stonecrop, or wall-pepper Sedum acre, is a low-growing, creeping plant is frequently found in coastal areas. This distinctive plant with fleshy, succulent leaves and bright yellow star-shaped flowers is also a popular rockery plant. The common names derive from the bitter, peppery taste of the leaves.

Orchids are star attractions among Connemara’s flowering plants. The common spotted orchid Dactylorhiza fuchsii, with its pink to mauve flowers and spotted leaves, occurs most frequently. The early-purple orchid Orchis mascula is less common, but its deep purple flowers are more likely to be found than those of rarer species such as the pyramidal orchid Anacamptis pyramidalis or the fragrant orchid Gymnadenea conopsea.

Wild thyme Thymus polytrichus is often abundantin coastal areas. During its flowering period, June to August, it is easily recognised by the tiny flowers that form pinkish-purple carpets on close-cropped grassland. During the rest of the year, closer examination is required to see the minute oval leaves of this low, creeping plant. Milder in flavour and scent than its cultivated cousin, wild thyme can be used as an herb in cooking or as a tea.

A SELECTION OF COMMON CONNEMARA SEAWEEDS

Bladder wrack Fucus vesiculosus is dark olive brown in colour, and may be identified by the inflated oval bladders situated in pairs along the fronds. This seaweed can be cooked and eaten as a vegetable.

Dabberlocks Alaria esculenta has a relatively short, wavy blade compared to other members of the kelp family. The edges are often split and have a feathered appearance.

Sea lettuce Ulva lactuca is commonly found attached to rocks and pebbles. Translucent, light to dark green in colour, the broad, crumpled blades are quite tough. Sea lettuce can be cooked and eaten in salads or soups, or raw with rice vinegar and soy sauce.

Carragheen, or Irish Moss Chondrus crispus is a red alga, with broad, fan-shaped fronds that are divided several times, giving the appearance of wedge-shaped branches. Since it is a rich source of vegetable gelatine (alginate), carragheen is often used in soups, icecream and jellies. Many Irish people value this seaweed as a treatment for coughs and sore throats.

Poor-man’s weatherglass Laminaria saccharina is a brown seaweed, rich in alginates, that grows at low-water mark on rocky shores, attached by a branched holdfast. It has a single ribbon-like blade characterised by its crinkly appearance.

Lithothamnia is commonly found lining rockpools in Connemara. It is a calcareous seaweed that forms pink or purple encrustations up to 20 mm thick on rocks, often covering the entire surface. 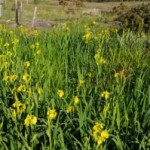 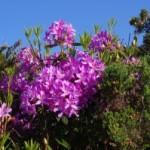 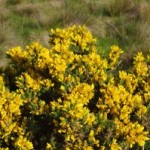 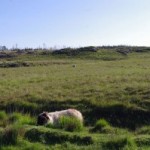 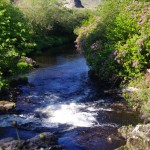 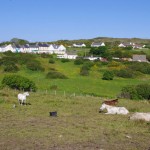 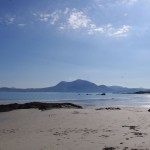 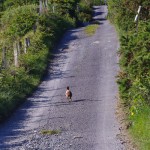